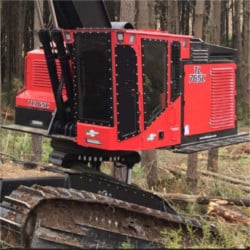 The TimberPro TN765D-Series has been fitted with a new larger cab that has improved visibility both out the front of the cab as well as the boom side. Also now equipped with High Output LED lighting that will increase night time visibility in both the work area as well as directly under the cab to illuminate the tracks. The last major refinement of the cab would be the addition of a digital climate control system to keep the cab temperature steady and comfortable.

The Cummins L9 Performance Series StageV engine contains an EGR-free architecture and compact Single-Module™ aftertreatment system. Because of reduction in size of the emissions components we were able to still meet all the requirements of Tier 4 Final, increased the horsepower and torque rating but we were still able to keep an almost zero tail swing design.

The new L9 engine also boast increased fuel economy and longer maintenance intervals over the previous models that will contribute to a reduced cost of operation and lower overall Total Cost of Ownership.

Our new TimberPro D-Series will be able to boast an increase in production and and still maintain the reliability and customer support that TimberPro has always been know for.

Please Refer to the TL765D Brochure